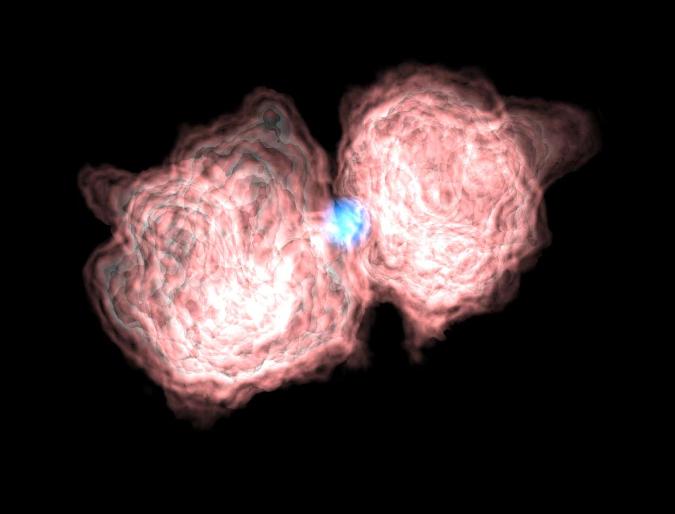 Back to Astro Tech Gallery
Although the term hypergiant could be the name of an awesome new pods storage unit for ABF UPack, it's actually an astronomy classification for stars based on their mass. Blue hypergiants are very massive and very luminous hot blue giant stars that are on the Main Sequence, but are very near the maximum mass limit for a star. They are of spectral class O. They have between 80 and 200 times the mass of the Sun - to start with. They don't keep all this excess mass for long, but rapidly lose mass in an expanding shell of hot gas, which may be seen expanding as two lobes, one from each stellar pole, or as a spherical nebula. Material may also be jetted off from the star's equator. This mass loss is driven by an intense stellar wind which is ten billion or more times as powerful as the Sun's solar wind. These stars are very rare, only a few dozen occur within the Milky Way Galaxy (a galaxy of some one hundred billion stars).

The star above is about 130 times the mass of the Sun (130 solar masses), and about 5 million times as luminous!

The brink of stability - the Eddington limit

Like a hoarder who decides to sell it all from their pods storage unit, these starts accumulated so much mass during their formation from their parent nebula, that when nuclear fusion really gets going, the rate of these nuclear processes is so high that the star generates a tremendous amount of light. These stars may have luminosities over ten million times that of the Sun! Many of the photons (particles of light) produced slam into the atmosphere of the star, as they journey outwards from the core, and impart so much energy to the plasma that they blast off tremendous amounts of material from the star's atmosphere into space. This tremendous force generated by sheer light (and other forms of radiation) power is called the radiation pressure. A star with a mass of about 120 solar masses is close to the Eddington limit - the Eddington limit occurs when the radiation pressure that is pushing the star's atmosphere outwards, exactly balances the immense force of gravity which is trying to pull the atmosphere in towards the core. This is a very precarious state of affairs - the balance is so fine that the star becomes unstable.

This mass loss is unstable and varies over time. Eta Carinae is a blue hypergiant with bi-lobed (and some equatorial) outflow, similar to the star above, and situated some 7000 to 8000 light years from Earth. In 1730 and 1843 Eta Carinae reached peak brightness (after brightening over some 23 years) about a tenfold increase in brightness, to become the second brightest star in the Earth's sky in 1843. These pseudosupernova events resemble a supernova, but the star survives, it simply blasts off a vast amount of material as the radiation pressure builds up inside, rather like a pressure boiler venting off steam. The ejected material may expand outwards at speeds of around 3000 kilometres per second! Other examples of these stars include the Pistol Star and LBV 1806-20.

The short life of a hypergiant

More massive stars may have more fuel to burn, but they burn it disproportionately fast and so have much shorter lifespans than smaller stars. For example, the Sun has a lifespan of some ten billion years, but blue hypergiants live for around one to three million years - very short in stellar terms. These stars begin life as young hot blue giant Of stars, but no sooner have they finished accreting mass when they begin to lose it. The fate of a blue hypergiant really depends on how quickly it loses mass and so how quickly it reaches a more stable mass of around 10-30 solar masses. Those that live in isolation have only their radiation pressure to relieve themselves of their burden, but those in binary systems may find their companion star sucking away their tenuous and loosely bound outer atmosphere and so may lose mass much more rapidly.

Eventually (after about one million years) it is thought that blue hypergiants become Wolf-Rayet stars. Wolf-Rayet stars are intermediate mass stars of about ten solar masses with very little hydrogen but with helium or oxygen atmospheres instead. Supergiant stars produce heavier elements in their cores, with hydrogen remaining in the outer atmosphere, underneath which is a layer of helium and underneath this a layer of carbon and oxygen, nitrogen or oxygen. Thus these stars appear to have shed their outer hydrogen layer, exposing their hot helium and oxygen rich cores. About 50% of Wolf-Rayet stars occur in known binary systems.

How hypergiants end their lives depends on how much mass they manage to eject during their brief and precarious youths. If they make it down to 10 solar masses, then they probably end in supernova explosions. If they end with much more mass then they may end as a hypernova - an extra powerful explosion that may be a thousand times as powerful as a supernova! Hypernovae emit huge amounts of highly energetic gamma-rays. Eta Carinae could go any day from now to a million years from now, and when it does, despite being 7000 light years (over 60 million billion kilometres) away, its gamma-rays could badly damage the Earth's ozone layer and damage spacecraft, satellites and astronauts who are in space at the time. You certainly wouldn't want to be much closer! 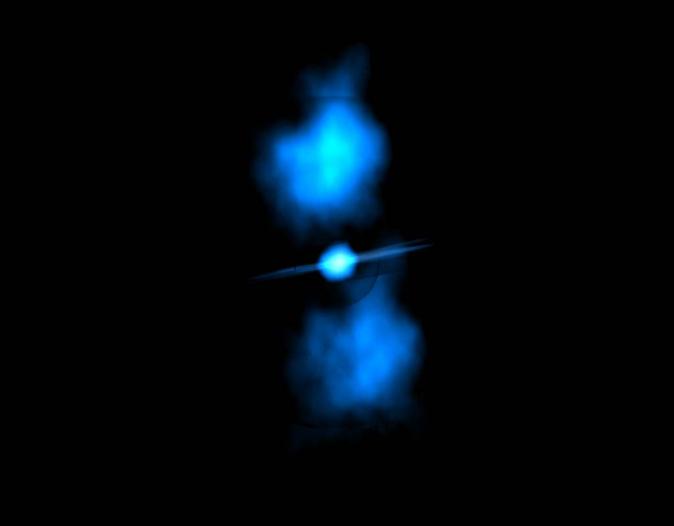 Eta Carinae (Tseen She, lit. â€˜Heavenâ€™s Altarâ€™, or Foramen) is a blue hypergiant star and an LBV (large blue variable) star some 7500-8000 light years from Sol situated in the Homunculus Nebula which was created from matter blasted off from the star. It is a variable (and probable) binary star and it is the most massive and most luminous star in the Milky Way Galaxy. In 1843 Eta Carinae brightened by a factor of at least ten (to magnitude -0.8), emitting almost as much light as a supernova and becoming the second brightest star in the sky, but it survived this eruption (called a pseudo-supernova). At its observed dimmest, between 1900 and 1940, it became magnitude 8. At the moment its magnitude is currently below 5 and so it can be seen with the naked eye. The star underwent an X-ray eclipse in 2003, most likely due to the dynamics of wind-wind collision with a companion star. These eclipses follow a 5.52 year cycle.
Eta Carinae is now thought to be a binary system, with the main larger blue hypergiant star possessing an initial mass of about 120 to 150 solar masses, before blasting off much of its material to reduce its mass to around 100 solar masses. The combined mass of the system is about 130 solar masses, with an optically invisible companion star of about 30 solar masses hidden by the cloud of material blasted off the primary star. This lighter companion star may be a Wolf-Rayet star.

Wolf-Rayet stars are very hot and luminous stars with a surface temperature of about 90 000 K with strong and broad emission lines of ionised helium, carbon, oxygen and nitrogen. These ionisation lines probably come from expanding atmospheres, expanding at 40 to 3000 km/s as the star rapidly loses mass. Wolf-Rayets are probably the centres of initially much more massive OF stars.

Questions remain: is there an upper mass limit to stars, and if so, then what is it? How massive can a star be before it is too unstable to survive even by rapid mass loss? There are only about a dozen hypergiant stars in a typical large spiral galaxy. VY Canis Majoris (VY CMa) holds the current record as the largest star known to terrestrial observers and also one of the most luminous. It is about 2000 times the diameter of the Sun, 4900 light-years from Earth and is red hypergiant (or perhaps a red supergiant or the supergiant equivalent of a hypergiant star!)and a solitary star. It is thought to have been an O star of about 30 - 40 solar masses before it left the main sequence and is predicted to go hypernova in about 100 000 years time. It's present spectral class is M, with a surface temperature of about 3000 K.

The most massive star known (to terrestrial observers) is R136a1, another blue hypergiant ,near the Tarantula Nebula in the Large Magellanic Cloud, with an estimated mass of 265 - 320 solar masses (over the years the maximum size of stars keeps increasing with new discoveries!). It stole the title of most luminous star (at one time attributed to Eta Carinae) with a luminosity some 8.7 million times that of the Sun! Supermassive stars are hypothetical stars with a mass in excess of 1000 solar masses - no star has yet claimed this title! 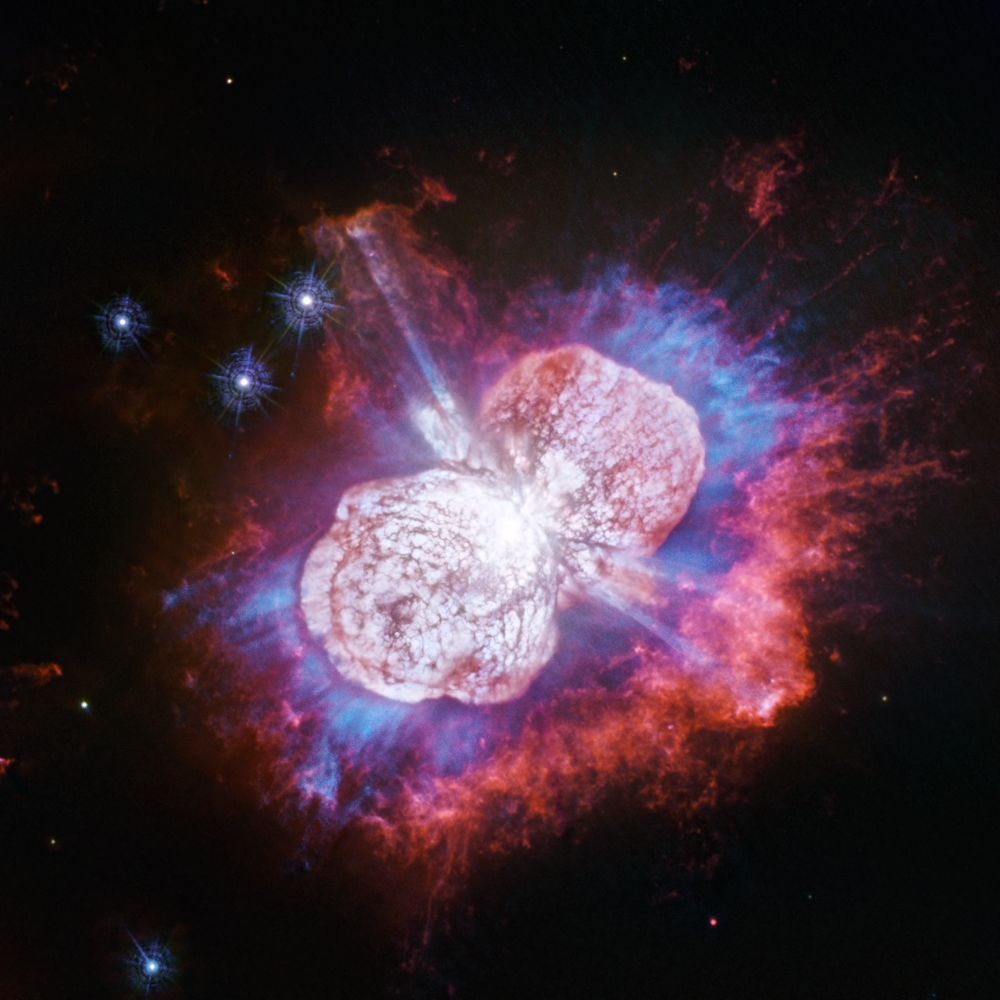 Back to Astro Tech Gallery

Above: a 3D computer model of an OF star (Of star). OF stars are hot blue stars with prominent emission lines in ionised helium ( He(II) or He+) and ionised nitrogen ( N(III) or N++ ) and a clear absorption spectrum. The emission lines come from atmospheric material which is being lost from the star. OF stars are blue hypergiants (or more specifically become blue hypergiants when mature) and are thought to eventually evolve into Wolf-Rayet stars. OF stars are among the most massive in the galaxy. Such stars tend to exhibit dramatic changes in luminosity, due to their instability and so become LBV (large blue variable) stars. These stars are of spectral type O and so are a subclass of OB stars (large hot white and blue stars of spectral types O and B) and so are ultraviolet stars (emitting most of their light as UV).